The angel announcing the birth of Jesus could have visited any number of people. However, the angel specifically spoke to a group of shepherds who were tending their sheep. The shepherds were terrified upon seeing the angel. Not only did they see this angel shining with God’s glorious light, but then, many more angels appeared. The shepherd’s uneventful night became an experience which forever changed their lives.

Generically speaking, shepherds were typically single men. Their homespun clothes were soiled due to contact with the sheep and the difficult tasks they performed. They were often isolated and at the lower end of society. Their lives followed a set pattern of daily responsibilities. 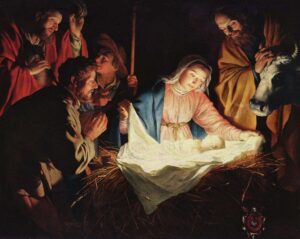 Shepherds keep their flocks intact. Sheep tend to wander so sharp eyes are needed to watch for any who stray from the flock. Shepherds are familiar with all of the ways of the sheep under their care. He knows his sheep.

Shepherds provide protection. Besides knowing the environment, shepherds also know what predators wait in ambush. Some of these predators are vicious and strong. The shepherds put their lives on the line to protect their sheep and made many sacrifices.

What an interesting occurrence, the first humans invited to worship the One who would become the Good Shepherd were shepherds. Their routine responsibilities reflected the future ministry of Jesus. These men were invited just as they were to visit the newborn Messiah. After the initial terrifying encounter with the angels, what were they expecting to find? How did these simple men, process the spiritual reality unfolding right before their very eyes?

If you were with these shepherds, how would you have approached the baby Jesus? What thoughts would occupy your mind as you drew near to Him? What would it be like to look upon the face of Jesus in those humble, stark surroundings? As you read the nativity story this Christmas, stop for a moment and place yourself in the sandals of the shepherds. How would you have worshiped Him?