I have a problem of using food to try to settle myself down at the end of a day. I’ve known this about myself for years but haven’t done much about it. In my life, it’s been one of those sins Paul writes to Timothy about, the kind that isn’t outwardly obvious on the face of my life, but that follows behind to judgment (see 1 Timothy 5:24).

Recently, God spoke to me about this: “You don’t need two dinners.”

Like so many other temptations in my life, more food calls to me with a promise. Its call isn’t just “Hey, this will taste good,” any more than sexual temptation used to call to me with “Hey, this will feel good.” Temptation’s call speaks to a deeper, hungrier place than the belly or the groin: It calls to our souls, and it says…

What is one habitual, long-term temptation that calls to you?

Whatever it is for you, dig deep enough down and you’ll find its stream makes its way into the deepest caverns of your soul—that place where bedrock holds up your life—that place not just of want, but of need.

This is one reason giving up a long-standing sin doesn’t happen by mere resolve. If you found the footer of your house was faulty, you wouldn’t just go and dig it out, or your house would fall down.

Graciously, God is not satisfied with our faulty foundations. He wants our lives to be upheld by something (or Someone) substantive enough to weather every storm, even into eternity. And so He points out our faults, tells us we don’t need two dinners, forbids sexual immorality and excessive drink, tells us to let go and trust, commands us to keep the Sabbath, calls sin sin and not something less.

And if we’re willing, then the excavating begins. 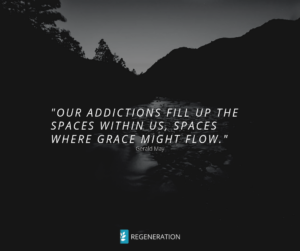 This is where I’m most prone to stumble.

Replacing faulty foundations means first removing the old, and even as God is ready and willing to move into the gap, I’ve found that His presence there doesn’t feel like the old did, and that can leave me feeling vulnerable, like there’s a space.

Of course the old sinful foundation wasn’t strong enough to really hold up the house, but at least for a while it sure felt like it was.

With God, even though it’s surely a fact He is strong enough, that doesn’t mean I always feel it. As a Christian believer, this is where the rubber meets the road. I can say with my lips, I believe He will meet all my needs and satisfy all my hungers, but those words of faith without deeds* is not real faith (see James 2:17, 18). *Translation: Keeping the fridge closed.

I was here a long time ago with sexual temptation. Maybe that’s where you are now, or maybe you’re here with some other persistent temptation. I’m here again, this time with a second dinner.

So pray for me as I practice just eating one dinner. More importantly, pray for me that I’d become more accustomed to bringing that deep and true hunger to the One who said He is true food and true drink (John 6:55). I’ll pray for you, too.

4 thoughts on “Resisting Temptation (That Space Between Two Dinners)”